March is National Engineering Month-Canada's biggest celebration of engineering-and an opportunity to show young Canadians the exciting career opportunities that engineering has to offer. We are proud to employ engineers in Calgary, Ottawa and Halifax. We will be sharing employee profiles throughout the month to show you the challenges that our engineers face every day. Meet Ottawa engineer Kyle Stitt. 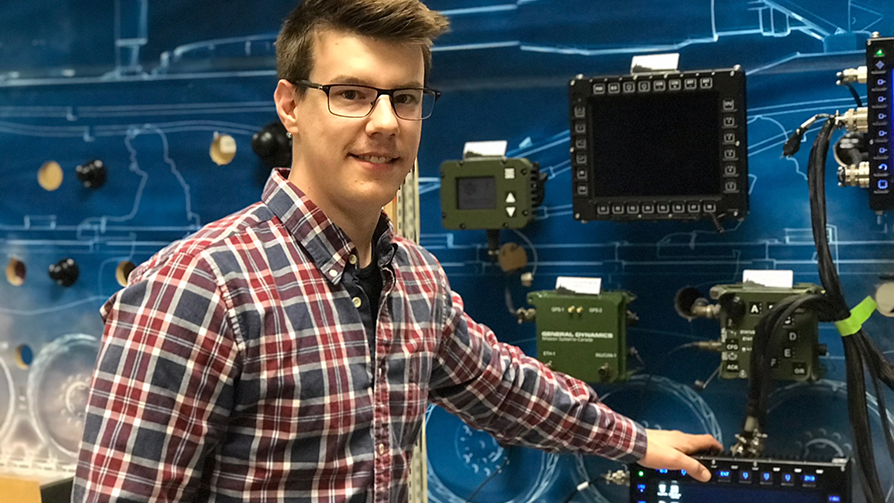 Kyle Stitt graduated from Carleton University in April of 2012 with a Bachelor of Engineering in Mechanical Engineering. In November 2012, he joined General Dynamics Mission Systems-Canada.  How did he keep the wolf from the door in between? "With a job in a Bike Shop, if by wolf you mean my kind parents with their pretty laidback approach to charging rent," he laughs.

Kyle loved that bike shop job and kept it on the side for three years after he joined General Dynamics. "It was a fun, cool relaxed environment. I got to play around with my bikes, getting my hands dirty. Plus, there were side benefits. I was a bike rider-not road cycling: riding bikes in skate parks, doing tricks." Since skate park tricks are especially hard on bikes, "and on human knees," he adds, with that a quick laugh, he says those skills came in handy.

He comes by his mechanical ability honestly. Growing up in Ottawa, his dad was always "playing with fixing things, a snowmobile, a dirt bike." His parents taught him to believe that he could find his own answers, figure things out for himself and be independent. He says that they were always pushing him to make the best decision, to shoot for the stars.

Understanding how things work; wanting to fix them; wanting to make them work better; not being afraid to get his hands dirty. All these traits are what led him to engineering too.  It was a cool-headed assessment: being a car mechanic, while satisfying on some levels, offered too narrow a scope and limited opportunities for progression. Architecture? Too far removed from the fray. Engineering was the highest-level job that would combine his passions. Shoot for the stars...

At General Dynamics, Kyle's current role, new to him as of November, is leading a team that is working on the refresh of smart displays, while supporting the current production. "In simple terms, they are ruggedized, military iPads that go into a bunch of different military vehicles, providing situational awareness for war fighters. It's cutting edge - the pace of technology change is more rapid in this field -- and very rewarding, because our soldiers actually interface with these things. Our work directly affects how well they can do theirs."

While his new role still requires him to be figure out how to make things work better, now it is more about understanding how everyone that is technical works together across project, and how best to leverage people's skills sets.

"This job is a good fit for me. I am excited to get up in the morning and go to work." He describes General Dynamics is the kind of place where you have the opportunity to shape your own path. "I've never had a manager who said 'You can't do that.' Here, if there is a part of your job you are passionate about, you can push in that direction and take on more."  He gives as an example that he is currently running a side project involving developing virtual reality with military applications. "How cool is that?"

His advice for young colleagues is to seek out someone who is doing an interesting job as a mentor. "That person didn't start where they are now. A path took them there, and you can get good advice on how they got to that point."

Kyle is getting married in September to Ashley, a registered early childhood educator (RECE) teacher. The pair have known each other for a long time ("we went to the same high school") and have been together since they started dating at Carleton eight years ago. He is excited, and, like most grooms, short on details. "She is doing a lot of the planning. Basically, I am picking out a suit."

Kyle no longer does bike tricks in the skate park. His 27-year-old knees can't take it. Now in his spare time he works on cars in his garage. "I fool around and make something cool. It's safer on the knees but a lot more expensive..." Even though Ashley would prefer less mess in the garage, she is supportive, enthused by his enthusiasm. He smiles broadly as he describes how his bride-to-be sometimes tries to redirect his energy into home remodeling tasks. "She definitely knows how to channel child-like enthusiasm."