March is National Engineering Month-Canada's biggest celebration of engineering-and an opportunity to show young Canadians the exciting careers that engineering has to offer. We are proud to employ engineers in Calgary, Ottawa and Halifax. We are sharing employee profiles throughout the month to show you the challenges that our engineers face every day. Meet Halifax engineer Erik English. 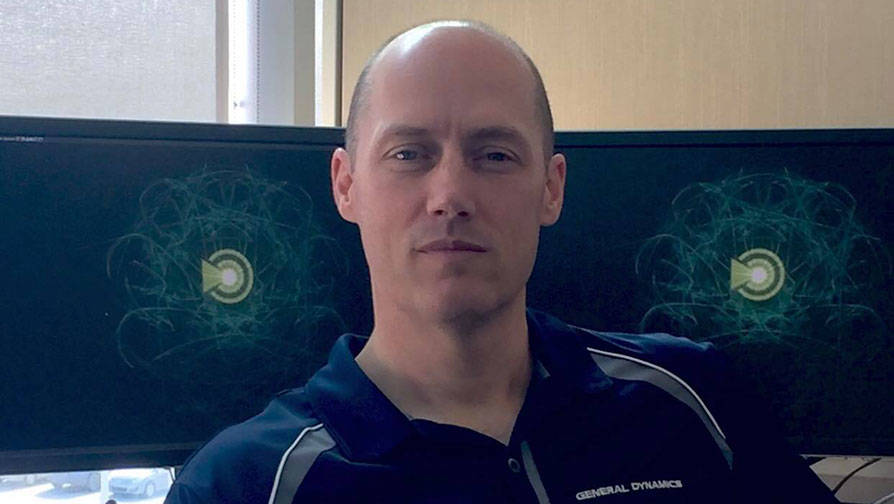 Erik came to software engineering in a very logical way through his interest in computers and his love of math. His path to General Dynamics Mission Systems-Canada was less direct though, taking a loop through the Canadian Armed Forces, and then a turn through Defence Research and Development Canada (DRDC) - Atlantic, along the way.

"I grew up in the late '80s and early '90s, computers were coming on strong. I remember learning a bit of programming and playing games on those old, old computers - like the Commodore 64 and the Texas Instruments TI-99/4A!  Software engineering seemed like the right fit for me, the right path to the future," he reminisces.

Erik grew up in the Halifax area, one of three kids, with a Dad who sold insurance and a stay-at-home Mom. It was a happy childhood. His was a family of relatively modest means, so when the time came, Erik joined the Regular Officer Training Plan (ROTP) in pursuit of a higher education and potential career path. "Mom was happy that tuition was covered and I wouldn't have any student loans!"  He studied at Royal Roads ("back when it used to be a military school") for the first two years of his degree and at Royal Military College (RMC) for the final two, graduating with a Bachelor of Engineering in Computer Engineering. As far as he knows, he is the first engineer in his family.

After a short stint exploring the possibility of a future as a navigator in the Air Force, he ended up in Halifax, seconded to DRDC - Atlantic. That is where he first came into contact with Computing Devices Canada (CDC) - now General Dynamics Mission Systems-Canada.

"I worked side-by-side with the CDC guys - we were on the same project." When CDC offered Erik a position, he didn't have to think twice. "I applied for early release - had to pay a bit back," he laughs, a bit ruefully, "and took the position. I wanted to seize that opportunity and work for this engineering company, with these people that I liked. It's really all about the people that you work with," says Erik, who, in fact, still sits next to one of the very guys he started with back in 1997.

Erik has no regrets about his path through military school. He says that it gave his younger self -discipline, while acknowledging with a smile how much of a cliché that is. "If you don't end up quitting - and many did - it teaches you that you can get through a lot of things, accomplish what you set your mind to."

These days, he works predominantly on writing software for "underwater acoustics projects, mainly user interfaces for acoustic displays, and some background processing things that you don't see, for shipboard, hull-mounted sonar and towed arrays." He has seen a number of changes since 1997. He mentions the purchase of CDC by General Dynamics, but lingers on the evolution in the way software is being developed. Whereas, when he was at school, the approach was mostly one that is commonly described as a waterfall, cascading from definition of requirements, down into development and eventually deliverables; today, the preference is for the Agile approach, where satisfying the customer by early delivery of software that meets their requirements, even as these change, is the highest priority. This is achieved through an approach that emphasizes flexibility and constant communication.

Outside of work, Erik keeps very busy with some extreme sports (he paraglides and kitesurfs, more of the latter than the former these days, largely due to the geography of Nova Scotia); home renovation projects; and keeping up with his close friend group. But it is family that is highest on his priority list. He speaks with warm affection about his siblings and his niece (Catherine, age 8) and nephew (Spencer, age 10). They are a big part of the reason that Erik has stayed in Halifax, and a driving force behind his latest home renovation project, the building of a bunkhouse out at the cottage to accommodate family and friends. "Our family gets together often.  Family dinners, board game nights, that sort of thing," he says.

Asked if Catherine or Spencer might follow in his footsteps and become an engineer, he laughs "Oh, I don't think so. Spencer doesn't like math and, Catherine? Well, for now, she seems to like art - she's always drawing and colouring."  But, as they say in the Maritimes, it is a long path that never turns, so who knows?